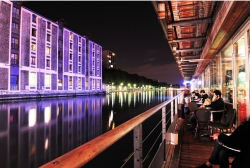 When you visit the most romantic city in the world that is Paris, France, you want to  stay in style - hey, it's a stylish city. And if you're on a budget, hostelling is the way to do it, so my tip is to book with St Christopher's Paris Inn. St Christopher's Paris Inn launched in 2008, where a well known architect called Chaix et Morel was brought in to fuse a 19th centruy warehouse with the most modern of qualities to create one of the most progressive feeling backpackers in the city.