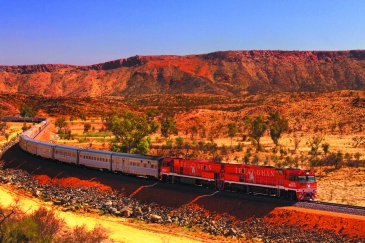 Australia, Alice Springs, Rail tour of the outback on the historic Ghan

Journeying by rail to Australia's Red Centre is hardly the fastest way to travel - but that's exactly why thousands do it. The Ghan has been crossing the desert from Adelaide into Alice Springs for more than 70 years, but these days it also collects passengers from Sydney and Melbourne. We boarded the Ghan in Melbourne after flying from Sydney.

It is one of the greatest ways to experience the Northern Territory Outback while not leaving the human comfort-zone of bunk beds, cooked meals and proper bathroom facilities. For those intent on having a motoring holiday but not wanting to risk a breakdown in the desert on the way, it is also possible to take the car aboard.

The Ghan inherited its name from the Afghan camel drivers who arrived in Australia almost 150 years ago to transport goods through the inhospitable terrain. Telegraph linesman later relied on camels before they were replaced by trains in the late 20s, when the Government decided to build a railway line.

The 1 1/2 day trip is one of the best ways to appreciate the vastness of the land. Panoramic windows in each of the cabins ensure passengers do not miss any of the sights, in daylight at least. There is also something to be said for the old-fashioned feel of the wooden-panelled interiors and uniformed conductors strolling the corridors.

Passengers ranged from families with young children, couples and backpackers to pensioners and war veterans. For most, it was their first trip, although one train buff named Frank, a war veteran, said he'd made the trip more than 10 times, simply because he relishes the experience. He doesn't even get off at the Alice but stays on board for the return journey.

We travelled overnight to Adelaide, with the few hours before bedtime spent in the lounge car, swapping travel tales with the other passengers and taking advantage of the bar. While some of the guests retired to the smoking lounge for port and cigars, I decided to give in to sleepiness and crawl into my first-class cabin bunk-bed where, despite the rocking and odd bump, it was surprisingly easy to sleep.

Brilliant sunshine blazing through the window took the place of a regular alarm clock, waking me naturally. But for those who might otherwise accidentally sleep through breakfast, a friendly announcement is made before food is served. Meals on the Ghan, unlike pre-prepared airline offerings, are cooked by on-board chefs and range from bacon-and-egg breakfasts to gourmet dinners. Later that night a grilled lime and ginger snapper went down extremely well with wine for dinner, while a picture-perfect orange sunset provided the backdrop in the restaurant car.

The Ghan passes through several key tourist spots on its way from Melbourne to Adelaide, including Geelong, the sandstone ranges of the Grampians, Victoria's wheat district and Bordertown. We arrived in Adelaide shortly after 10am and disembarked to explore the local sights for five hours before starting the final leg of the trip. There's a choice of tours but we decided to hit the local shopping strip before enjoying a long lunch in one of the city's many restaurants. The most scenic leg of the 2387km journey is from Adelaide. The lush green coastal vegetation rapidly turns more scrub-like as we pass by spinifex plains and salt pans across to the rugged MacDonnell Ranges.

Just in case of monotony, I had brought some books. A conductor took a bet that I would not get through one. He won. It is amazing how satisfying it is simply to watch the landscape, the changing colours of the sky and the sunset.

Most travellers watching their budget choose the day-nighter cars with reclining seats. But for those wanting a proper bed, sleeper cabins are available with almost all the facilities of first class, the only difference being they have to share a bathroom.

Overseas travellers are expected to make up the bulk of passengers on the Ghan when it embarks on a new route to Darwin. Construction on the long-awaited link has started and is expected to be completed by early 2004.

A Top End Club has been established to register the names of people who want to be first on the Ghan's historic first crossing to Darwin. But for us, when the Ghan rolled into the Alice Springs station at 10 am, everyone disembarked to begin the next leg of their outback adventure - everyone, that is, except Frank. 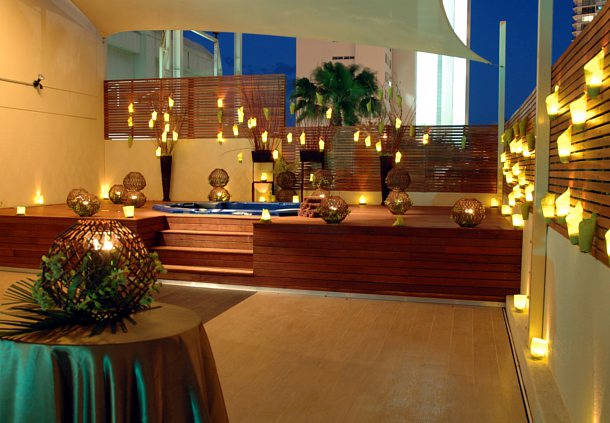 The Marriott hotel’s Lattouf hair and day spa, on Australia’s sparklingGold Coast in Queensland, combines an intoxicating infusion of the senses in order to create a perfect signature candle therapy massage. The Marriott hotel’s Lattouf hair and day spa is where amazing aromas, serene sounds and magical massage become like art.
Located in the heart of Surfers Paradise, the Marriott hotel sits on a glistening canal. If you arrive early, you might perch on a comfortable outdoor sofa to enjoy a moment of recreated tropical paradise within a city of sun. Or perhaps, seat yourself inside and soak in the elegance with air-chilled interiors. Lattouf Spa is located on the level 1, accessed only by lift, along with a state of the art gymnasium. The spa offers an abundance of hair indulgences and relaxing spa treatments, plus Jacuzzi, steam-room and sauna within a lovely five-star setting.
Antique wooden doors and burning candles frame Lattouf’s spa entrance, to immediately induce in guests a sublime relaxation state within the beauty den. On arrival, friendly staff will seat you, offer a soothing tea such as peppermint and liquorice, take your details, and escort you to a candle filled oasis treatment room - or into the modern hair salon, depending on the booking.
I enjoyed a Lattouf signature treatment; the pure Lattouf candle massage for intense hydration. A melon and fig infused candle was melted into oil, then expertly massaged and absorbed into my skin. While the candle aroma lingered, meditative soft tunes played on in background. Candle therapy works well for unwinding, with gliding elbows and kneeding hands on pressure points all the more smooth and sensual. Guests choose the candle scent to be burnt during massage. On offer are Lattouf exclusive aroma’s such as vanilla cinnamon and clove, or lemon and green tea, or Patchouli, aniseed, with ylang ylang – sounds like a hard decision? It is.
I recommend The Marriott Hotel Lattouf Hair & Spa to anyone seeking a spa which sparkles - a purely relaxing and indulgent day on the Gold Coast of Australia.
Contact tel: 1300 36 3737
Services spa, swimming pool, fitness equipment, near beach, parking, hotel restaurant, concierge, air-conditioning
BOOK NOW 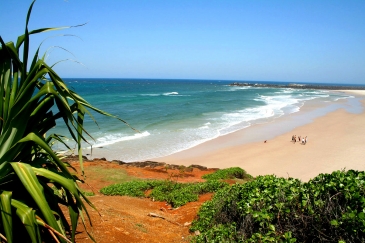 It's been a great Australian tradition to take the family away camping or caravaning in the school holidays, and Australian caravan parks are embedded in the Australian psyche of thousands of Australians as a childhood memory of timeless, lazy days by the beach, the smell of open fires and camp cooking, sing-alongs and walks in the bush... Aussie caravan parks have a unique atmosphere that is laid-back and friendly with a certain humble, rustic innocence that makes them a firm favourite for families and back packers alike when it comes to low-cost holidays that are a real, refreshing break from the daily grind.

There is a great caravan park with a difference, hidden on the south side of the Richmond River at the beachside town of Ballina, on the Far North Coast of New South Wales, only a half an hour from Byron Bay - the Ballina Beach Village.

Position is everything when it comes to great holiday locations and Ballina Beach Village has it all, the wide graceful Richmond River, abundant in great fishing on one side, absolute deserted beach frontage on the other, and pristine national park behind - it makes for the perfect getaway on a budget, and is especially well set up for a wonderful family holiday. 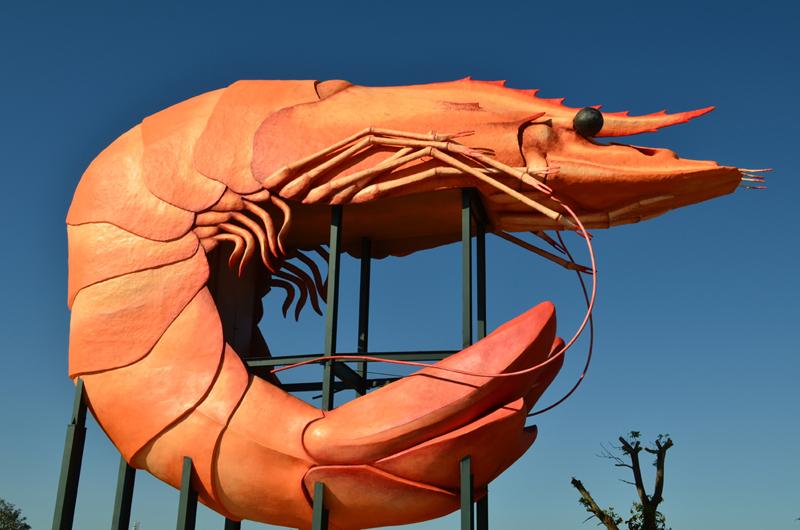 Heading south on the Pacific Highway out of Ballina, the Big Prawn is an iconic local landmark and the turn to Ballina Beach Village is left at the next roundabout, for half a kilometre to the Burns Point Ferry. 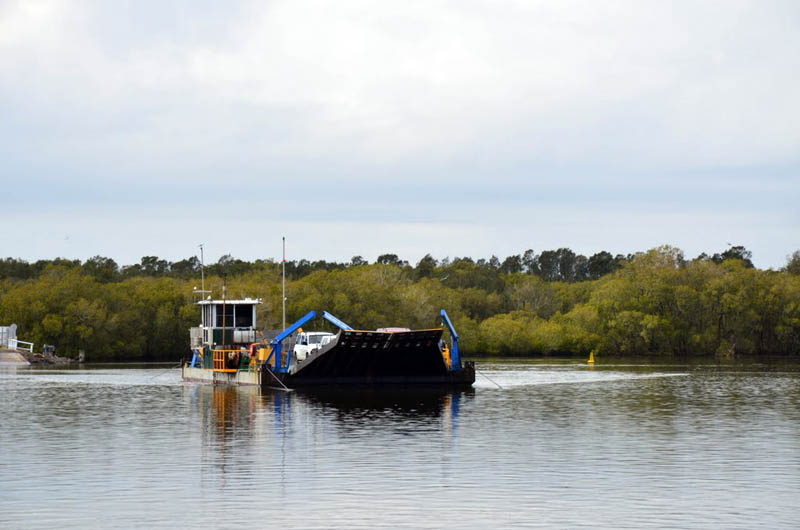 Let's hope they never build a bridge here - taking the old style car ferry makes you feel like you are leaving the world behind, and you immediately feel time shift down a gear, as you watch the pelicans gliding on the Richmond River against a backdrop of mangroves and fishing boats. Take the next left when you drive off the punt (don't forget to pay the ferryman -it's $4.80 for a car) and head along a good bitumen road past some isolated holiday houses and cane fields and out towards the beach.

Ballina Beach Village is the last on the right and is well sign posted, but you'll see the colourful flags along the road as you approach. 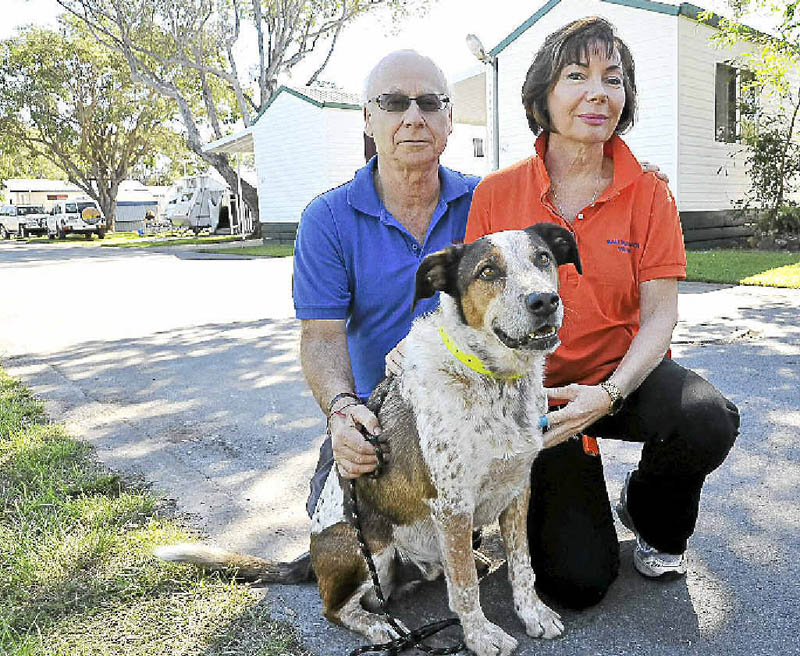 Owners Rikki and Bernhard Grinberg are there to meet and greet and they are a delightful, interesting and cultured couple with a grand vision for making Ballina Beach Village the best little caravan park in the Known Universe. 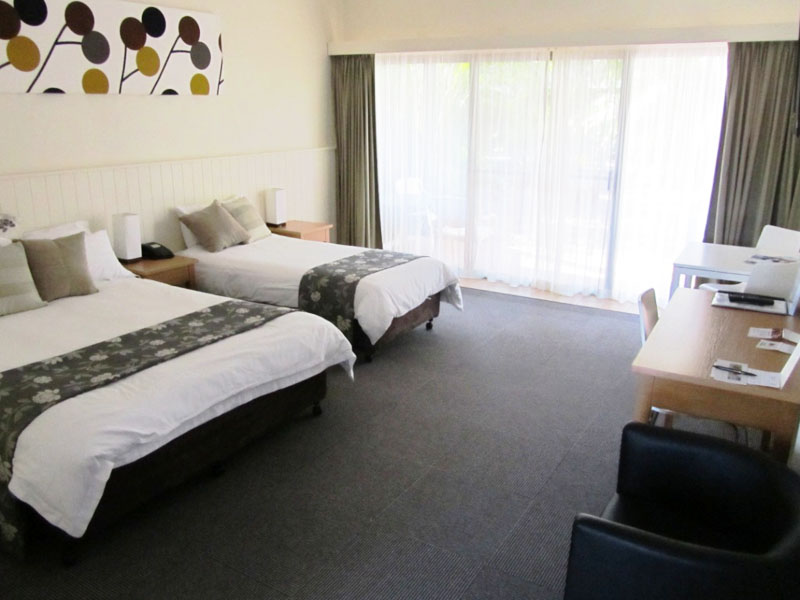 Halse Lodge is the closest hostel accomodation in proximity to the main beach of the very glamorous Noosa heads. Halse Lodge hostel in Noosa is set amidst a gorgeous Queensland tropical canopy to a beautiful daytime wild bird soundtrack. Charming and historic, the rustic Queenslander building sits atop a hill of dense tropical rainforest, just by the main roundabout to town, with pathways leading just 50 meters to the beach or lake canals. High-end shopping & dining along the main strip and cinemas are all nearby.

On arrival, if you are not greeted by the Halse Lodge helpful staff with giant relaxed Noosa smiles (see pic below,) then a giant relaxed lizard (see pic above) will likely say hello, often perching himself in the sun for your holiday instagram opportunities. Parking is free for Halse Lodge guests, which you will soon learn is the biggest bonus as good parking spots are hard to find around town in peak season.

After check-in to your private room or group dorm, a scheduled group tour of the hostel at the info session with a free drink is on offer. The hostel has a popular ping-pong table, bar and restaurant. Plenty of hostel activities are nearby such as stand-up paddle boarding or a glamorous gondola ride through the mansions along Noosa's canals.

Walking around the hostel building is instantly relaxing. So much rustic character exists on the giant wooden verandahs. Happy holidaymakers of all ages will likely be smiling against the sunny tropical bushland ambience, palm trees reaching inside though open verandah gaps. Once a guest-house run by the Anglican church, current décor utilizes history with a colourful design; church pews are covered in trendy bright cushions, and scattered basket chairs sit by stained glass windows. The building is under the umbrella of an enormous signature mango tree.

Your sleep is guaranteed because of a handy noise curfew, 11pm. Dorms are high ceiling tidy rooms with few beds – also great for sleeping. The public bathroom area is pleasant, clean, airy and large. If you are lucky enough to book a private room, it has a lovely freshly made summer bedspread with bedside tables, cupboard space, an abundance of shiny mirrors, modern lamp, two wooden chairs, and enough shelving to unpack your entire suitcases, plus plenty of clothes hanging space. Fans move the fresh beach air around rooms, and a stained glass window shows off that giant mango tree mixed in with palms tropical scene.

The restaurant at Halse Lodge has considerate prices, and creative charm gives a lovely ambience. Approximately 80% of customers dining will be non-guests. A sign with large chalk handwriting at the base of Halse Lodge temps the locals, showing off their delicious daily specials, when you seat yourself amongst the colouful cushions, tungsten lights and music for a fine meal, you'll know why.