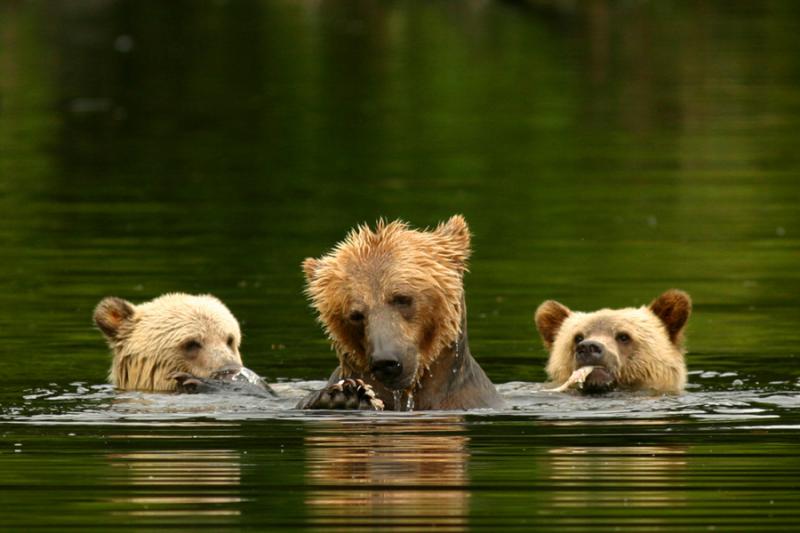 The seaplane dips ever so slightly as we approach to land on the glacial waters surrounding the wild, remote islands and inlets of British Columbia's far north-west.

From my vantage point in the cockpit, the pine forests stretch endlessly into the horizon, their uniformity broken by the occasional snow-capped rocky mountain peak. Apart from the odd lone fishing boat, there are no obvious signs of human life. We begin to close in on the green-blue waters of a fjord below with a gentle bump signalling our landing. As our pilot steers the aircraft down the waterway, the green-roofed floating log cabins of Knight Inlet Lodge come into view. Against the dramatic backdrop of the mountains, they seem positively dwarfed.

``Welcome to bear country,'' our pilot says as we pull up outside the lodge.

The bears he is referring to are the grizzlies -- the admired and feared animals which dominate Canada's north-west outskirts.
Knight Inlet has one of the largest concentrations in British Columbia. The guests who make the journey here come for just one purpose: to see these animals up close.
Two of the lodge's staff come over to greet us before we are led to our rooms. Mine is tucked away at the back of a cosy timber cabin with a fireplace and spectacular views across the inlet. We're given just enough time to settle in before the Lodge's guides direct us to a boat for our first bear-spotting session. As we set off, we are told the rules of bear-watching: no loud-talking, perfume or camera-flashes; the idea, of course, is not to attract attention.
No more than a few minutes have passed when our guide -- a Canadian local who drives huskies during the winter -- points ahead to a moving brown figure behind a bush. It moves forward so that its shape can be seen. Yep, it's a bear -- and a big one at that. We are told he is around 180kg and most likely a male.
The boat's engine is turned off and we sit and watch. It is so quiet that the cracking sound of branches being broken by the bear as he feeds echo through the valley. He eventually catches our scent and briefly lifts his large round head to sniff the air. Deciding the salmonberries on his bush are far more interesting, he resumes eating. We leave him be and continue our search.
The anchor is pulled up and we head to a grassland area further north where we find two smaller grizzlies on the water's edge.
We are told there can be up to 40 bears sighted within a few kilometres of the lodge. As they like to feed by the water, you're likely to see at least a dozen, even on a bad day. Satisfied with our first bear sightings, we head back to the Lodge for dinner.

Knight Inlet's two resident chefs have been cooking all day and their efforts of crab, roast beef, vegetables and varied cakes and sweets are devoured by our hungry crew. By the end of the meal, I feel as if I've consumed an entire bear.
Still, I somehow manage to squeeze in a glass of red by the fire where the rest of the guests have gathered.
The next morning, after waking to the sounds of bird calls, we are split into groups -- some will go off on a hike while others will take out the kayaks. Our group is hiking through a forest to see where the bears sleep, eat and just hang out.
After a short motorboat cruise down the inlet, we disembark before boarding a big bear-proof truck for our journey into the forest.
Unlike the rules on the boat, we are instructed to talk loudly when off the truck to let the bears know we are here. The aim of this tour is to see where the bears live, but not to actually run into one. If they know we are here, they will keep their distance.
We follow an old logging route into the forest. Light soon turns to darkness as the thick rainforest canopy blots out the sun.
We eventually pull over to begin the first of a series of short walks into the bush.
A few steps down a trail, we are stopped by our guide who crouches down near a brown mound ... bear droppings, and still warm. We look around nervously, but all is still: whatever left it behind has moved on.
As we move further down the trail, we come across a large sheltered depression beneath an old-growth rainforest tree. Our guide explains it is a ``day bed'' -- a place for bears to sleep in between foraging for food. Not far away we find a tree covered in bear fur which is used as a scratching post.
After a good few hours exploring, we head back to the Lodge for lunch before our afternoon bear-viewing tours. This time, more bears have come out to play. As we watch, two cubs take part in a spectacular chase along the water's edge. The pair are pursued by a cranky adult grizzly who has apparently objected to their presence.
Further along the inlet, a large chocolate-coloured head of another bear appears above the grasses. We also encounter a pair of bald-headed eagles carrying sticks to a nest, and an enormous sleeping seal making use of a random log which has floated into the inlet.
One of the guides offers to take us on an afternoon cruise to some of the inlet's glacial waterfalls. A thick blanket of fog descends into the cove before lifting to reveal mountain-top glaciers and sheer rock faces with waterfalls fuelled by melting snow.
We also see more bald-headed eagles and seals. But it's too early in the season for whales, which also frequent the local waters.
By the end of my three-day stay, I feel as if I have stepped back into a time and place before humans occupied the planet.
With just four hours left before I must fly home, I decide to squeeze in a last-minute kayaking tour. Three grizzly bears are out on the shoreline. My kayak drifts towards one of them. Although I am a good few metres away, I can see all his features in great detail -- from the hump on his back, a small scar on his head to his giant front paws. I thank him for allowing me into his home.

Several major airlines fly from Sydney to Vancouver, from about $AU1300. The lodge, Knight Inlet Lodge, is 80km north-west of Campbell River, British Columbia. Guests flying from Vancouver stay overnight at Campbell River before taking a float-plane to Glendale Cove.

Package: ... Scenic Tours' four-day grizzly bear expedition can be added to any of its tours or taken alone from May to late October. Fare from $AU2345 includes return air faresfrom Vancouver, two nights at Knight Inlet Lodge, one night at Campbell River. All-weather gear and boots included.
More: www.scenictours.com or 1300 723 642.

Australia, Sydney, A day with the animals with Sydney's Taronga Zoo

Sydney boasts a fabulously scenic zoo with animals from around the world living on grounds sitting majestically opposite the Sydney Harbour Bridge skyline.

A trip to the zoo is a definitely a great day out in Sydney. You'll walk through the entrance and see giraffes posing against this amazing skyline – a sight made infamous thanks to instagram, and because these giraffes sure know how to pose. You'll then stroll through the park observing animals in re-created living environments.

A great idea is to jump on the aerial pods on arrival, which take approx ten minutes to move over the park. You’ll get an idea of the entire zoo space, take iPhone snapshots of elephants from the air, and perhaps a selfie of yourself in the pod with that spectacular horizon in the background.

You can plan your day to the Zoo’s busy schedule of animal talks. Perhaps a seal show, or the koala encounter, and then inbetween shows visit your favourite animals. The Australian native black cockatoos with fancy yellow tips are a beautiful sight, and the gorillas are intriguing to watch with such adorable human expressions. Perhaps you'll choose to stroll past the playful seals 'barking' and splashing about in outdoor pools. The seals then dive below the surface into what is the underground viewing pool, if you wander underground to watch them swimming it is a very peaceful moment. Or maybe you'll want to visit the stylish looking zebras in the African Safari section, next to the mountain rams sunning themselves on rocky outdoor slopes.

If you’re more of a reptile person than a cuddly koala fan, head to the reptile centre. Through the safety of glass walls, see the most colourful reptiles living in their own little worlds. Some are ridiculously cute, and some are slithery and … well, snakes. If you are a snake fan you’re in for a real treat – every kind; giant sized pythons, underwater sea snakes, bright green tree snakes, and more. Watch them sleep, slither, and eat.

A trip to the zoo is a full day's activity. If you don't bring your own lunch, the cafe's and eateries are modern, moderately priced, and a nice environment to sit in. Be prepared to fall in love with a milion stuffed animals in the gift stores. There's plenty of paid parking, or nearby residency street parking. And expect to be spending the day with lots of children, the zoo is obviously a popular day trip!

USA, Galapagos islands, The unique Galapagos experience, and how to protect it 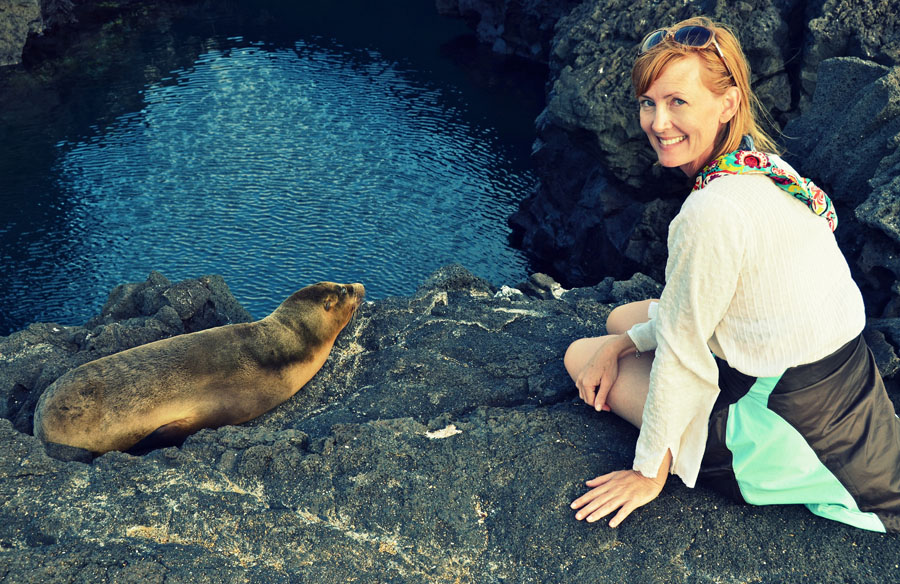 The chain of islands in the Pacific Ocean off the coast of Ecuador is famous for its inspiration of Charles Darwin’s theory of evolution and natural selection. Here on the Galapagos Islands, animals have evolved and adapted to survive in ways found nowhere else on earth.