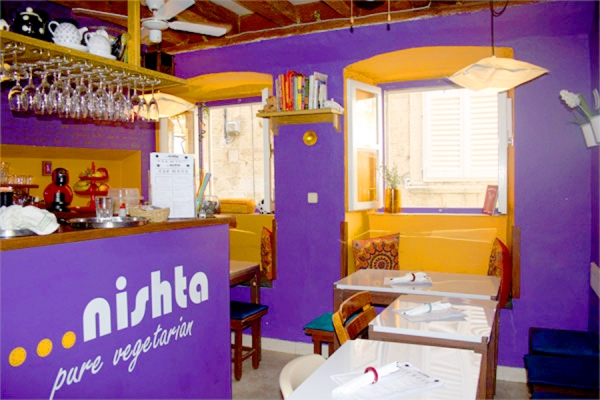 To be vegetarian in Croatia, or any of the Balkan countries for that matter, is considered simply absurd. It is widely misunderstood.

For a country whose staples consist of predominantly meat and bread, it wouldn't be uncommon to be offered chicken upon declaration of vegetarianism. But in Dubrovnik in Croatia's south, a bright and entrepreneurial institution for the region - though a welcome find for many travellers - is forgoing the trend to offer pure vegetarian goodness. And so became the refreshing little hub that is Nishta - a word meaning "nothing" in Croatian. After all, many a local would persist, if there is no meat on offer than what could there possibly be.

Located within the historic walls of Dubrovnik's Old Town, Nishta stands out with its purple interior and chatty, filled tables, yet sneaks a great spot being just a few building blocks and stairs from the busier pedestrianised streets. With word spreading fast, a booking at Nishta comes highly recommended. Perusing the menu poses a difficult choice between the enticing range of entrees, mains and desserts, including a number of vegan and gluten-freeoptions. There's even wine and beer to compliment.

With Spanish gazpacho, ratatouille and miso soup, as well as spring rolls, lentil cakes and nachos - and this is just to start - it's probably best to arrive on an empty stomach. Move on to a main from just about any continent in the world. From soy and sesame chowmein to falafel with salad, chilli and hummus, to a Moroccan chickpea and raisin broth accompanied by couscous, the menu doesn't stop here. Also bragging a Swiss ragout, Mexican tempeh burritos and a pick of three Indian curries, plus more, do you believe me now how hard it is to choose? And don't forget dessert. Whilst the chocolate fondue and rice pudding are tempting, the most intriguing is easily the Croatian-inspired dish on offer - dried figs cooked in sweet wine, topped with a mascarpone-cinnamon cream.

Carnivore, omnivore or herbivore, or whatever other name you give yourself, make the most of this welcome surprise in the meaty Balkans. The first vegetarian restaurant in Dubrovnik is sure to delight.

Nishta also humbly refers to the Sanskrit word 'Nishta', which defines an elevated state of mind in meditation, a stage preceding Nirvana.

If you have an experience - we want to know about it! Please get in touch, as our writers, videographers and photographers are roaming the globe in search of the next amazing experience to feature, & we may have an ambassador near you right now.